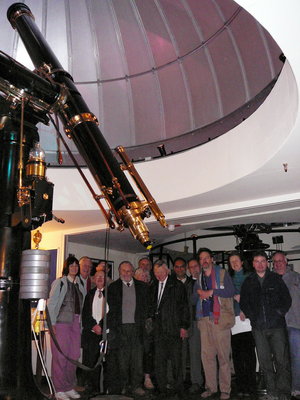 OAS members in the Fry telescope dome at Mill Hill

A small party of Society members made their ways by various means to Mill Hill to have a tour of UCL’s observatory on Saturday evening. The observatory tour had been postponed twice before, but that meant we got to see it in its newly refurbished glory. We were met by the former Director Mike Dworetsky and two UCL astronomy students. The sky was clear when we arrived but due to cloud over so we started the tour by having a brief look at a double star, Gamma Andromedae, through the Fry telescope. Then the clouds obscured the stars. We were then shown round the observatory.

The Fry telescope is a beautifully restored 1862 Cooke 8-inch refractor. It was presented to the Observatory in January 1930 by Mr. H. R. Fry of Barnet. It was refurbished from 1982 to 1997 by UCL students and staff, and looks really stunning. 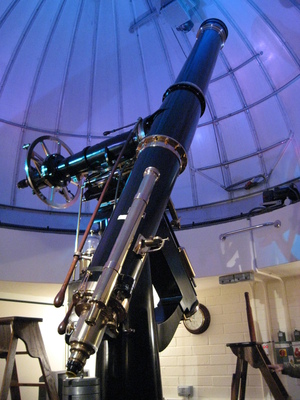 We then had a look at a modern Celestron 14-inch Schmidt-Cassegrain scope on a Paramount mount which is being used for research astrometric observations such as those used in the search for exo-planets. Next was the the Radcliffe twin refractor. This was built in 1901 by Grubb of Dublin, originally for the Radcliffe observatory in Oxford, where it was used primarily for parallax work, and was moved to Mill Hill in 1938. This is the largest telescope on site with a massive dome. It has one 24 inch refractor and one 18 inch refractor piggybacked on a German equatorial mount. A computer-controlled guidance system was built for it in the early 90s, and is still used to control it.

Finally we were shown The Allen telescope. This is a 24-inch Cassegrain reflecting telescope of Ritchey-Chretien design, built for UCL in 1974. It is mainly used for spectrographic work.

The tour ended in the observatory’s lecture room, with a showing of an extract on the birth of stars from an ESA DVD, and a chance to ask questions. This was an excellent tour enjoyed by all, many thanks to Mike and his students for a wonderful evening.

(Browse our gallery for larger versions of the photographs.)