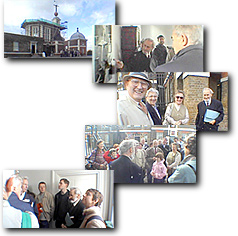 Thanks to the great efforts of Gilbert Satterthwaite, we were privileged to be given a full day’s visit to the Old Royal Observatory in Greenwich Park. It was Sunday 6th October 2002 and the weather was slightly cloudy but otherwise extremely bright. A total of 30 people turned out for the “several” guided tours.

Gilbert first described the outer courtyard areas showing exactly when all the buildings were erected and for what purpose. By far the prettiest must be that of Flamsteed House on top of which is the now famous Time Ball, denoting to the great legions of trading ships in the port of Greenwich when to set their clocks. Indeed even today the ball is still keeping the mark of one o’clock by descending the mast on the top of Flamsteed House. Today however it is a sight for tourist only.

We were also shown into the various buildings and some of their progressively more accurate time keeping instruments. It was explained that Greenwich was erected in the first place to study how the Earth moved in space relative to the background stars as it travelled around the Sun. A strict regime of marking the exact moment when a known star’s image would pass in front of a “fixed” telescope’s aperture would be keep up clear night after clear night. Since the more effort placed in these endless observations continually refined those valuable timings. Gilbert went on to explain how over the many years of occupancy by the great Astronomer Royals of the day, the instruments would be replaced and superseded by newer more powerful models. Indeed, the last instrument through which an official measurement was made (by Gilbert himself!!!) was done so on the Airy Transit Telescope – a period of continuous operation from 1852 to 1954!!

The last demonstration of the mooring was in the Planetarium. We were shown the basic movements of the sky as seen from London and Orpington. Gilbert then lowered the lights completely effectively removing the annoying atmosphere giving us views of the heavens as if we were in space itself. The stars were magnificent. After some small demonstrations of the constellations and how they and their stars were used to navigate the great seas in times gone by, we journeyed to the southern sky. There, in all its glory was the Southern Cross and of course the closest stars to our own in Centaurus.

After a break for lunch, we were shown the famous Octagon Room with its various windows for observing. Gilbert also pointed out that the building was not aligned north/south – east/west, making observations a little more difficult!!

Closing the long day at Greenwich, Gilbert finally gave a short talk on the famous Harrison Clocks – a magnificent achievement by John Harrison, giving sailors in rolling seas the ability to tell the precise time – this in turn allowed them to know exactly where they were without reference to the night sky.