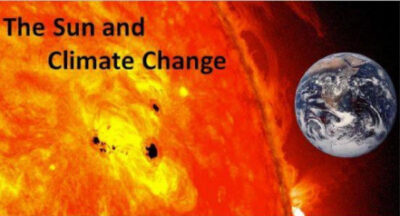 Robin Catchpole is an astronomer with the Institute of Astronomy, Cambridge, having retired as Senior Astronomer at the Royal Observatory Greenwich in July 2004. He is currently involved in research of the structure of the bulge in our Milky Way galaxy.

The lecture started with Robin explaining the way the sun works, the reasons for sunspots and how they increase and decrease in number every 11 years with cycles of varying strength. There was a large focus on the evidence used to explain the way sunspot activity affects our climate. The influence of sunspots was then compared with the impacts caused by the rise in carbon dioxide (CO2) in the atmosphere and the Greenhouse Effect.

Robin discussed the Milankovitch cycles which describe the collective effects of changes in the Earth’s movements on our climate over thousands of years. He also referred to the Maunder Minimum, a period between 1645 and 1715 when sunspots became exceedingly rare. Robin emphasised that correlation of data with glacier fluctuations does not imply causation of climate change.

Robin concluded by highlighting that changes in climate have occurred in the past and will do so in the future without human intervention. However, in the last 100 years CO2 in the atmosphere has steadily increased due to human activity and since 1970 the influence of the sun has taken second place to the effects of CO2.