Jodrell Bank The radio telescopes at Jodrell Bank can be seen from the M6, an impressive sight on the skyline. We saw them as we completed our long journey by coach from Orpington, having left at 6:00 am. The trip had to be rescheduled due to snow in March. We eventually were able to reorganise the trip for the middle of June when we were joined by some members of Crayford Astronomical Society.

The Lovell Telescope is an awe inspiring construction close-up. Unfortunately because of high winds when we visited it was ‘parked’ with the dish pointing straight upwards although this was done after we glimpsed it from the motorway. We were a little disappointed that we could not view the interior of the dish at all. However, it is a necessary precaution because once in the past the 76.2 metre (250ft) diameter dish almost came adrift from its frame. Visitors can walk almost all the way round the radio telescope, giving opportunities for photographs from many different angles. There are posts giving information about the telescope and history of the site. When it was built, the Lovell Telescope was the largest fully steerable telescope in the world; it is now the third largest. Some information is quite amusing – rain water is drained off the dish through pipes, but snow piles up inside it. One photograph showed the dish being angled so all the snow fell out in a mini-avalanche! 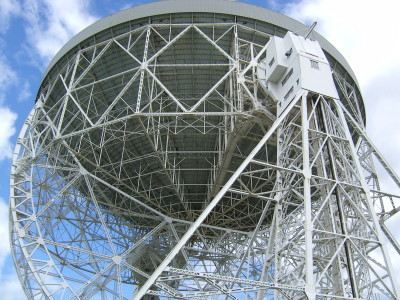 We were given a brief talk about the history of the Lovell Telescope and work it is currently involved in. After the war, Bernard Lovell returned to the University of Manchester to continue his research on cosmic-rays. He was the Founder and first Director of the Jodrell Bank Observatory. The first radio telescope was a Transit Telescope which made the first discovery of radio waves rather than cosmic-rays. Some of these radio waves were emitted by the Andromeda Galaxy. It was Lovell who designed the telescope we see today, which is steerable to enable it to point at different parts of the sky. Although the design recycled various bits of military hardware the cost of building the telescope escalated from £120,000 in 1950 (about £2.7m today) up to £700,000 by 1957 and completion of the project was in doubt. However, Jodrell Bank became world famous because it was the only instrument in the world which was capable of using radar to detect Sputnik’s carrier rocket, and from then its future funding was assured.

The first scientific work at Jodrell Bank included radar studies of meteors and the Moon. In the early 1960s the Lovell Telescope was linked to a smaller telescope which was gradually moved away from the main instrument. This meant that it was possible to zoom in on some bright objects in the sky, and thus quasars were discovered, they are amongst the brightest objects in the Universe. The Lovell Telescope is also well known for its work on pulsars.

Currently, Jodrell Bank is at the centre of the development of e-MERLIN, an array of seven radio telescopes, spanning 217km, connected by a new optical fibre network. It is designed for high resolution radio astronomy observations, operated by The University of Manchester its unique combination of angular resolution and sensitivity will be crucial for understanding:

• the physical processes which govern the formation of stars

• activity in nearby galaxies

The exhibition pavilions at Jodrell Bank provide the opportunity to view yourself and others in infra-red, print out a 30 second live graph of the current power fluctuations from the radio telescope and operate a large model of an Orrery by cranking a handle (much to the delight of some of the younger visitors). There are also extensive gardens to explore.

Many thanks to Doug and Rose for their hard work in organizing this successful trip which was enjoyed by all.