The Deep Sky Camp was a fantastic success. All the members that came had a really enjoyable time. Even though the weather was quite cold, nothing could dampen the spirits.

Saturday was, for a little while, overcsat. But our spirits were certainly not dampened. Indeed, it took several of us to convince Mike not to get his guitar out.

DSC, as it is affectionately known, began on Friday 24th October. Mike & Cris, Paul, Jeff and Miriam and Jim were the first to arrive. Greg, Rachel and the kids were delayed by one night. The sky was unbelievably clear – only 50 minutes from Orpington. The downside was that the temperature was good and sharp also, although no-one minded. For some reason not yet fully understood, the camp fire was NOT lit until the Saturday lunchtime.

There was very little cloud about and although conditions were not perfect, due to the wetness of the air, they were far better than we have become accustomed to in light polluted Orpington. To this end, one of the aspects we concentrated on was limiting magnitude, successfully obtaining a figure for each of our three evenings at the camp. 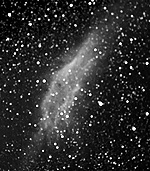 Meanwhile, we had visitors. Penny and Johann, our hosts, had come to the field to see what we were up to. We were able to show them Mars and later, Saturn, through the telescopes, as well as Alcor, far apart from the double Mizar, giving them some idea of how much our images were being magnified. They were also impressed by the beautiful double Albeiro in Cygnus; from there we could not resist showing them a close up view of the Pleiades.

There were plenty of meteors whizzing about, as if we did not have enough to look at, but close doubles were difficult to resolve, especially through the 2-inch Zeiss refractor, which failed to separate either Gamma Arietis or the Trapezium, two objects entirely able to be seen under better conditions. Then, as midnight approached, the viewing improved.

The two huge sunspotscaptured on video during the day.

Mike and Jeff began to discern more than the six stars that can usually be seen unaided in the Pleiades, a seventh, an eighth, a ninth, is that a tenth, or are we imagining it? In fact we saw eleven, not having counted HD 23753, even though it is only half a degree below eta and 27. For those who want to try it themselves, the six were :- 17, 19, 20, 23, Eta and 27 Tauri plus BU, 16, 18 and 21/22 which, at only 2_ minutes apart, looks to be, to all intents and purposes, a single star. I recommend that you take up the challenge of how many you can see at our next Deep Sky Camp.

Paul getting the Sun and its huge spots into view.

Miriam was not going to stay Friday night and finally took an ailing Jeff home with her a little before 1 am. With the ground cold and crunchy beneath our feet, an impressive layer of ice on Jim’s telescope tube and fog rolling in, we retired to our tents, only to be woken by a mad unzipping, zipping and mild profanities aimed at the temperature from Paul who woke at 5 am wishing he had brought that duvet after all.

Saturday dawned with blue skies, all present enjoyed a communally cooked breakfast. Penny came out to check that we had all made it through the night and to point out the rather large pile of firewood available to us. Not needing to be told twice and like all good pyromaniacs we soon had a roaring fire. The scopes were out again this time to look at the two huge sunspots that were visible to the naked eye – using a suitable filter of course! Mike and Cris popped home to feed a most unimpressed cat, leaving Jim and Paul as fire monitors. Later Jim went to his boat on the Medway and sensibly retrieved some extra bedding. 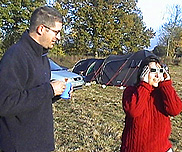 Cris looking at the sunspot group which was naked-eye.

Greg, Rachel and the kids arrived on the Saturday afternoon, as did Miriam with a recovered Jeff (this time Miriam was staying in the farmhouse), but Rick’s car had decided that staying at home (ed. It’s going to the garage on Thursday for a severe talking-to.) was the better option (where is John Cleese when you want him). After seeing one poor soul tucking into a pot noodle, Penny felt sorry for the OAS crowd and made two huge steaming pans of soup. By dusk, we were all sitting around a hearty campfire devouring the soup. Skies dutifully cleared, as they had done the night before, and we were able to establish that the limiting magnitude was the same as it had been the previous evening. This meant that we could, once again, enjoy looking at the Milky Way and be able to see the double cluster in the sword handle of Perseus. Chris brought Karen along to see us, perhaps they could not quite believe that we would all be there. Soon after, the sky clouded over and we were back huddled around the campfire, until a hint of drizzle in the air encouraged us to turn in for the night. By midnight, it was raining hard, but that meant no frost and at least we had the extra hour to look forward to.

Imogen taking advantage of a free push even if it was airborne.

We awoke to the sounds of the country, a blackbird clucking indignantly at a passing kestrel, as we continued to settle into the easygoing nature of life under canvas in the middle of a field. A target was found for the bow and arrow that Sebastian had so thoughtfully brought along for the adults to play with, until the trusty shaft shattered, after finding its mark once too often. The wheelbarrow that had been provided for collection of firewood proved equally as useful for giving Imogen a lift and seeing how high she could be propelled into the air when encountering an obstacle at speed.

We baked bread in the clay oven, potatoes by the open fire and inspected the Medicine Wheel in the next field, as a glorious rainbow coloured the horizon. With dusk approaching and food supplies running low, a trip to the chippy was in order. Suitably fortified against the elements, another night of astronomy ensued. The sky was clear virtually down to the horizon by sunset and Greg managed to find us Venus through binoculars, though the slender crescent Moon remained elusive. We then found Uranus with binoculars as easily as we had done on the first night, but our attempts at locating Neptune were fruitless, we must have seen it, but seeing and identifying are two different matters. Conditions never returned to how they had been after midnight on Friday, when Mike was able to point out M36 and M37, two star clusters in Auriga, with the naked eye, but our mid-evening survey of limiting magnitude produced a result of 5.5, as it had done on the two previous evenings. 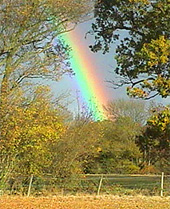 During one quick shower on Saturday afternoon there was a magnificent rainbow.

Our hosts came to visit us once more and we found new objects for them to see, the “Coat hanger” and M13 with binoculars and M15, another globular cluster, through Paul’s 8″ reflector. Jeff had located R Corona Borealis, having a bright interlude before it gets “sooted up” once more and disappears from view, with binoculars, then found it for them in the 2-inch Zeiss. Paul found M33, the Triangulum galaxy, and M27, the Dumbbell nebula. Next was M57, the Ring nebula and, by the time Nigel and Chris arrived, with his telescope on this occasion, Saturn was up above the horizon, with Titan nicely placed. Paul had a superb image of the California nebula in Perseus displayed on his screen. Good though conditions were, Jeff could not see M74 with the 2-inch Zeiss, but both M42 and NGC 1977, the nebulae of Orion’s sword, were splendid sights through it.

The camp had progressively emptied during the evening and, by the time Jeff and Miriam left, the fire was down to embers and Paul was left alone to get on with his fantastic astro-photography.

Unfortunately not soon after everyone else had left the clouds rolled in and the rain started. The clouds cleared at around 3am, Paul stuck his head out of the tent flap to see a gloriously clear sky, but the “lightweight” went back to bed to dream of duvets and central heating.