The subject of March’s OAS meeting was The Antikythera Mechanism and the Mechanical Universe and it was presented by Professor Mike Edmunds. 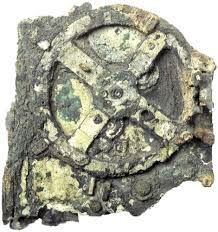 He started his talk with a brief history of its discovery.  In 1901/2 a hoard of magnificent objects was recovered from a wreck site off Antikythera, an island between Crete and the Grecian mainland.  The retrieval expedition found remains of a roman trading ship of about 100BC, at which time Greece’s golden age had past and Rome’s expansion had begun.  One of the apparently inconsequential objects from the hoard, a corroded lump, had split open in its new alien environment.  It revealed what looked like a circular gear-wheel, which led to early investigations into the object.  By the 1960s and 70s Derek de Solla Price and Michael Wright provided pioneering radiography detective work on the finds – which indicated probable astronomical use.

The later and most recent research, involving Professor Edmunds, was made up of teams from the UK, Greece, X-Tek, Hewlett-Packard and the US.  New investigative tools were developed (variable illumination angle tomography with considerable computer processing) and shipped to Athens.  The corroded lumps, when viewed with these modern scanning techniques, revealed beautiful gear wheels and ancient Greek script – clues to the item’s use.  There were pieces missing, particularly at the back, but it was apparent from the 82 fragments retrieved, that there were 30 gear wheels recovered (or partially so).  It was also apparent that many more were missing.  Indications of spindles and pointers for the Sun and Moon (phases) and a slotted off-set lunar gear were noted. 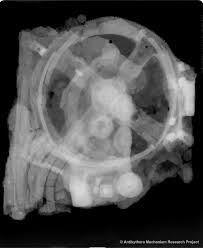 The engraved text highlighted three key numbers, 19, 76 and 223, which astronomically equate to respectively the Metonic cycle, the Callippic cycle (19×4)-1 day, and the Saros eclipse cycle; accurate to an eight hour period.  The mechanism was thus an astronomical and calendrical calculator, and the number of (manually cut) gear teeth indicated their use.  The “chariot wheel” on the front of the object, turns once for each year of calculation.  On the back were spirals divided into 235 (lunar month) divisions.  These were tracked by a pointer gradually pulling out; analogous to a record stylus playing a record groove.

The cycle of Hellenic games (analogous to annual Olympic Games) is represented in the piece; the slotted gear gives us the non-circular lunar motion, the large gear even gives us the precession of the lunar orbit (8½ years).  The mechanics and epigraphy (style of writing) are both consistent with 140 – 100BC.  One layer of engraving refers to the objects in the Greek universe e.g. Aphrodite and Hermes.  However, these are listed in the Greek order (Moon, Mercury, Venus, Sun, Mars, Jupiter and Saturn) along with text on each.  There is therefore, little doubt that the missing gears catered for these objects.  Modern reconstructions allow all these bodies to be mechanically included on the mechanism.  There can also be no doubt that such objects were referred to as Spherae in ancient Greek literature (including Archimedes and other contemporary sources).  In fact, the number of references strongly suggests that Spherae were widespread if not common.

No inference to astrological or navigational use could be found and the current best guess for origin is Rhodes in 100BC.

The Antikythera Mechanism is the earliest known use of gears by some distance.  Technologically, the piece remained unsurpassed until clocks of the middle ages.  There are reasons for believing that some of the technology survived into the early Arab astronomical astrolabes etc. though these are an order of magnitude simpler.

In essence the whole Mechanical (Greek) Universe is encapsulated in a small shoe-box sized object, driven by a single knob on the side of the box – not a bad addition to anyone’s (ancient) library!

Professor Edmunds’ talk over-ran, much to our delight, such was the enthusiasm for both the subject and Mike’s presentation.