Saturday 23rd August – The Bromley Library Display openened. Throughout National Astronomy Week the O.A.S. had a display in cabinets at the library, showing various aspects of the Society’s activities.

Thursday 28th August – The public evening Meeting at High Elms Nature Centre was well attended, despite the bad weather and the power cut in south-east London. The clouds and rain did however prevent us from doing any observing.

Saturday 30th August – Bromley Day. This was held at Bromley Central Library. Along with all the displays there were members of the Society discussing astronomical matters with the interested public. Between the clouds, there was also a live relay of images of the Sun’s disk from a telescope on the library’s roof.

Saturday 30th August – The Public Observing Session at the High Elms Nature Centre was very successful, with a clear sky and plenty of enthusiastic visitors who were shown Mars and other celestial sights through a selection of members’ telescopes. 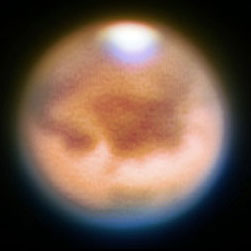 On Saturday 23rd August, we set up a large display in the Public Area Gallery of the Bromley Central Library. Many thousands of people use Bromley library so the flow of traffic is considerable!

As announced in the Press, on Radio, on the website and in the library, there was to be a public open meeting on the Thursday 28th August. Entitle The Planet Mars, this was extremely well attended. However the weather was not behaving so NO observing was achieved after the talk. But assurances were given to those that attended, that every effort would be made to see Mars on the coming Saturday.

Saturday started with many members of the Society turning up at Bromley Central library to help put out the tables and plug in all the equipment. So along with the filled cabinets, we now had computer displays, demonstrations a prize draw quiz and even one member fully dressed in a Russian cosmonaut spacesuit! There was a huge amount of interest, especially by mid afternoon. Certainly ALL of our membership application forms had been taken! There was also a great take up on the quiz, with lots of people eager to get their hands on the magnificent astronomy book prize.

In the evening, we had once again arranged a talk on Mars plus another on the mechanics of why this particular “opposition” was so special. We also showed what they were expected to “see” through the telescopes – NO, not a beautifully clear picture of a huge Martian disk, but a very small delicate pinky orange globe being slowly manipulated by the Earth’s turbulent atmosphere.

Everyone in the audience could wait no longer and made their way up to the observing site. The sky was clear, even the Milky Way put on a show. Then as the evening drew on, Mars made its entry onto the celestial vault. What a sight. Onlookers stayed – almost welded to the eyepieces. In the dark, you could hear lots of excited chat. The public stayed well into the late evening.